The crypto market is in the red zone as several top-flying projects lose steam in the opening month of 2022. However, the nascent industry’s strong fundamentals lend a positive outlook for the remaining months of this year. Despite the slight dip, there are still several top crypto to buy for price recovery and possible gains in the remaining days of January.

This review highlights the top 5 of such projects while considering their technical and fundamental performances in the last 24 hours. 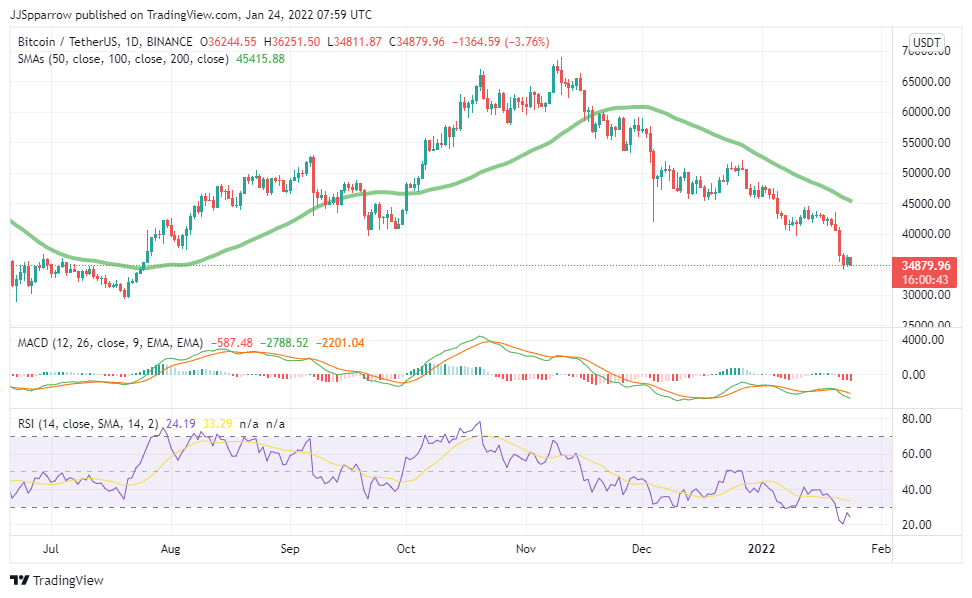 Bitcoin remains the number one for the top crypto to buy in January despite seeing a major price slash since 2022 began. The decentralised asset’s strong appeal as a store of value has kept it in the top spot on the most valuable crypto asset by market cap since launching in early 2009. Bitcoin has empowered a lot of individuals much to the chagrin of centralised authorities.

One of such is European super-power Russia which is currently considering banning cryptocurrencies and Bitcoin in its territory. This move follows many governments’ growing regulatory oversight for the top digital asset, particularly China. However, Bitcoin’s appeal supersedes growing regulatory sanctions and foremost Bitcoin hodler and enterprise software company MicroStrategy has increased its Bitcoin position.

According to a recent Securities and Exchange Commission (SEC) filing, MicroStrategy has purchased another 1,914 Bitcoins for a reputed amount of $94.2 million in cash. This puts MicroStrategy’s Bitcoin treasure trove well above the 100K mark.

The premier digital asset has struggled to make leeway this year and is currently trading at $34,879.96, down 1.54% in the last 24 hours. The moving average convergence and divergence (MACD) indicator point to a sell signal as the orange trendline soars above the buy signal.

The relative strength index (RSI) is also at an all-time low (ATL) as BTC currently stands at the oversold figure of 24.75. However, the crypto market is expected to rebound as the bearish trend lifts in the coming weeks. 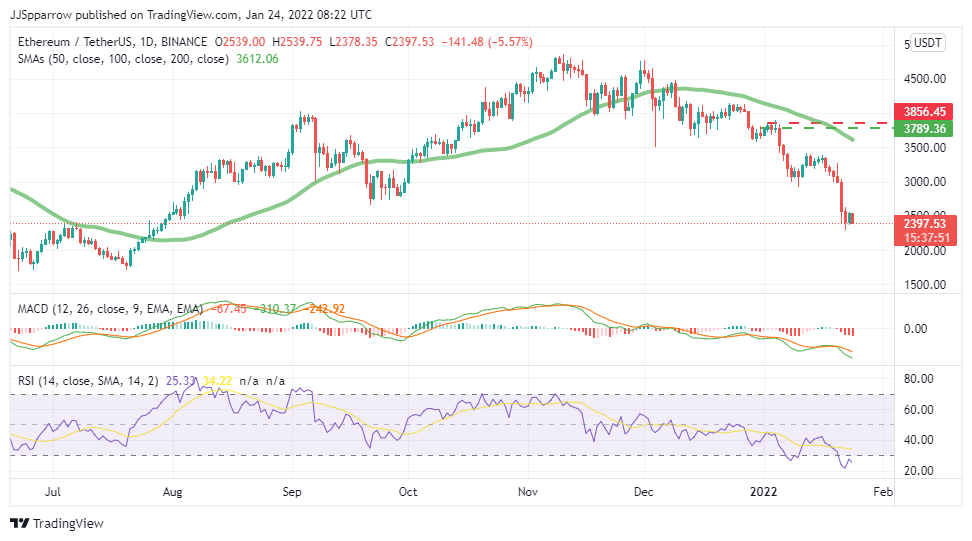 Ethereum is another top crypto to buy for a bargain as the crypto market tries to find its feet this year. Ethereum is the foremost smart contract platform and commands as much as 97% of the global decentralised economy, including decentralised finance (DeFi), non-fungible token (NFT), and the Metaverse ecosystems.

Ethereum has struggled with scalability and fee issues since the boom of these ecosystems due to its reliance on the ancient proof-of-work (PoW) consensus algorithms.

However, the second most valuable crypto protocol is currently working on migrating to a newer consensus algorithm called the proof-of-stake (PoS) model.

Price-wise, ETH has trailed alongside Bitcoin as the bears hold full sway of the market value. ETH is trading at $2,397.53, down 3.66% in the past day. This follows a hardline of major crypto sell-offs as global inflation fears increase. 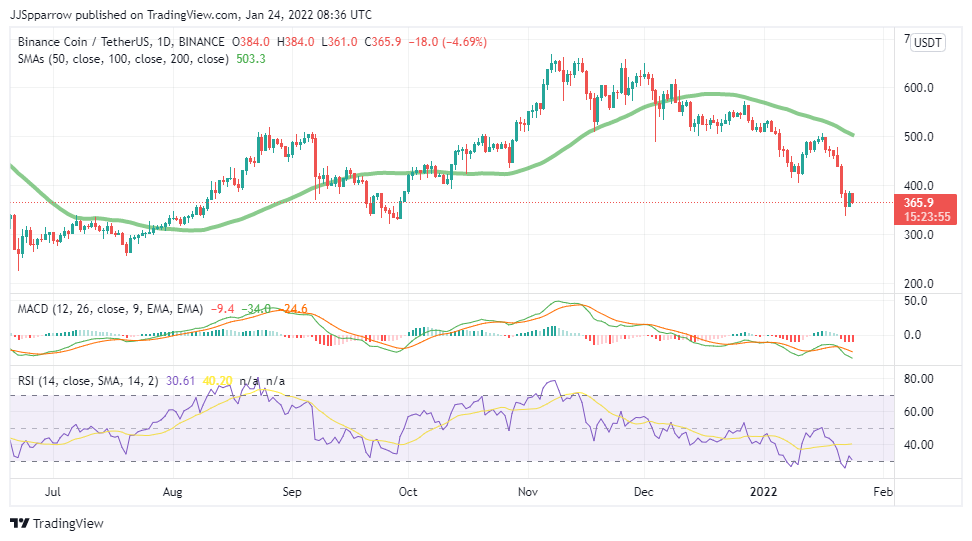 Binance Coin has remained a top crypto to buy for the past year since breaking into the top five most valuable crypto assets with a 1000% increase in the first half of 2021. Serving as the discount token for the Binance exchange, BNB has since become a major force following its use case in the Binance Smart Chain (BSC).

Binance Coin has also increased its value due to its reliance on the token burn mechanism. Focused on a manual format, a specified amount of BNB tokens are permanently removed from circulation, further boosting the token’s value due to scarcity.

However, the top crypto exchange has since moved to an auto token burning strategy. In a recent announcement, the Binance exchange said it burned 1.6 million BNB tokens worth well over $750 million. With this new system, the number of tokens to be burned is determined using a formula based on the total number of blocks produced on the BSC network.

BNB has not fared any better than the two crypto heavyweights on the technical aspect. Binance Coin is currently trading at $365.9, down 3.93% in the past day. The digital asset is trading well below the 50-hour simple moving average (SMA) indicator price of $504.9, pointing to a strong bearish outlook. 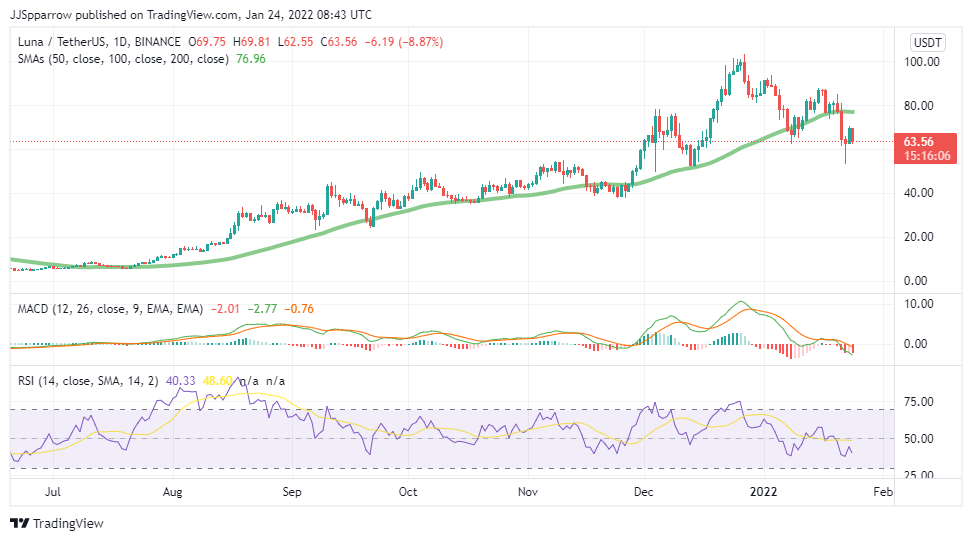 The Terra blockchain has been a breakout star in the past month and is one of the top crypto to buy as altcoins continue to gain speed in the crypto space.

Focused on leveraging the capabilities of cryptocurrencies while maintaining price stability with fiat-backed stablecoins, the Terra blockchain has become a darling among crypto investors since 2022 began.

Terra blockchain is now home to some of the hottest upcoming protocols interacting with all key financial offerings in the blockchain-driven economy.

To that end, Terra is the second smart contract platform with the most total value locked (TVL), only behind Ethereum with $16.61 billion to boot, according to DeFi Llama.

Governance token LUNA has gained significant value after the TVL run-up and previously surged to $103.32 towards the tail-end of the year. 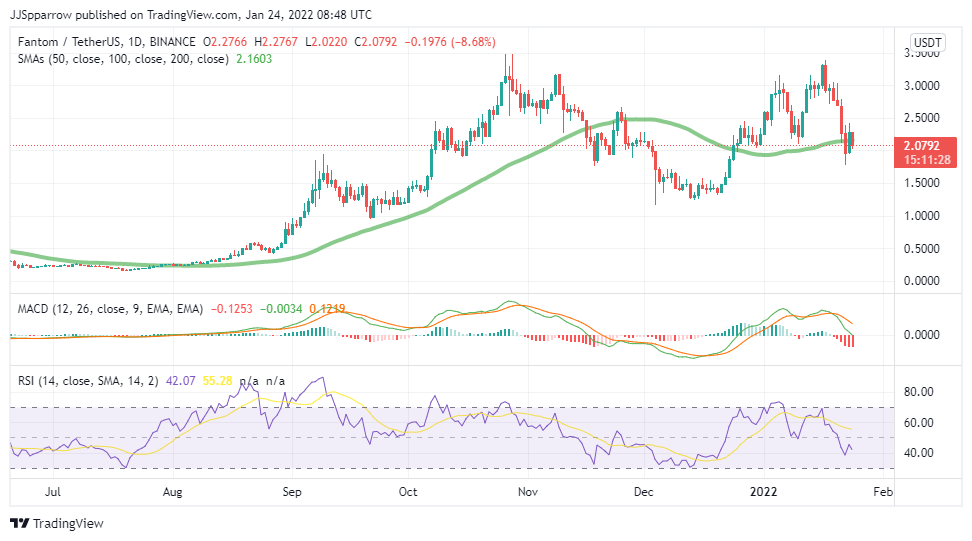 Fantom is one of the most exciting smart contract protocols in the crypto space and a top crypto to buy for the coming bull season. Looking to replace Ethereum in the new DeFi order, Fantom offers a more scalable, cheaper, and less energy-intensive blockchain solution.

The protocol is also closely linked with yield aggregator developer Andre Cronje who is currently building a new sidechain solution on Fantom.

Fantom has seen its value and TVL increase in the last few weeks, with the protocol jumping from the number 8th spot to the third protocol with the most value locked, according to DeFi Llama. Adding to its growing popularity, the top centralised crypto exchange FTX has recently listed the FTM mainnet on its platform.

The FTM price has idled with the broader crypto market and is trading at $2.07, down 8.62% in the past day. However, the top crypto asset is trading slightly below the 50-hour SMA price of $2.14, pointing to a likely reversal in the coming days.