At the time of writing the Lucky Block price is close to retesting its previous all-time high of $0.0075 on Pancakeswap DEX and potentially breaking out into price discovery again, tagging the $0.007 level earlier today.

LBLOCK did also spike to an ATH of $0.00835 on centralized exchange LBank on the day of its listing, Feb 11th.

The price chart above is displayed on the Binance website. Binance exchange – the largest in the world by trading volume – has not yet listed LBLOCK but does still track price information for popular altcoin projects and new upcoming crypto tokens on its radar.

In terms of return on investment (ROI) for investors LBLOCK is one of the best new cryptos of 2022, up more than the 700% displayed above as Binance began tracking the LBLOCK price a couple days after it opened for trading.

InsideBitcoins readers were tipped to buy it at phase one of its presale, and during its price rally, as the project’s marketing team is partnered with the UK based Finixio media network.

LBLOCK’s success and attention in mainstream media outlets such as Yahoo Finance and the Express may have prompted Binance to track its price data.

Coinbase also has a graph tracking the price of LBLOCK, and the LBLOCK token has been trending on DexTools and the top daily gainers list on Coinmarketcap.

How high will Lucky Block go in 2022? To be the next 100x altcoin relative to its presale it would need to reach a price of $0.015 per token, and a fully diluted marketcap of over $1 billion (based on a maximum total supply of 100 billion tokens). Currently that is at about $650 million.

A $1 billion market capitalization is an achievable milestone for a popular altcoin – Coinmarketcap ranks LBLOCK the #2913 altcoin by marketcap, i.e. several thousand existing altcoins have a larger marketcap.

In previous news updates we noted how Lucky Block is respecting Fibonacci levels during its uptrend. That has continued over the past days. 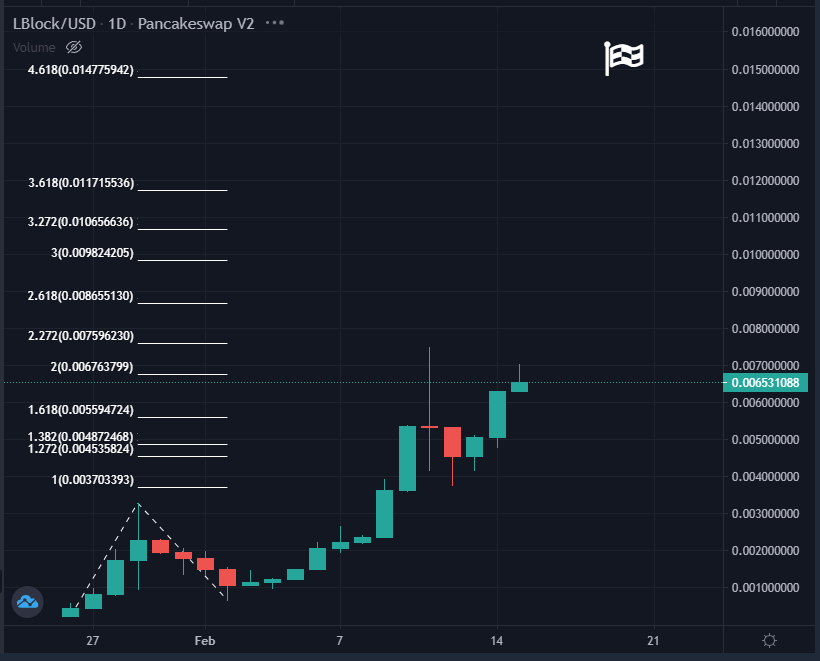 The 2.272 Fibonacci extension level marked the new ATH set on Feb 11th. Fib levels typically act as support and resistance levels and price reversal areas – in this case being a resistance line from which price reversed.

The LBLOCK price then found support at the 100% Fibonacci extension (at $0.0037), bounced and closed a daily candle above the 1.272 Fib, showing investor’s interest in buying Lucky Block at that level. The 1.272 Fib extension is often plotted as it is the square root of 1.618, the Golden ratio.

Price then broke above the 1.618 Fib where it had previously formed a Doji candlestick, and closed a daily candle above it, suggesting bullish continuation.

The LBLOCK price is currently attempting to close a daily candle above the 200% Fib (at $0.0067). If it is able to do so there would then be little resistance preventing it from setting a new ATH and entering price discovery.

In strong uptrends the 4.618 Fibonacci is another common take profit target for traders, which lines up with approximately where LBLOCK would be the next 100x altcoin, at just under $0.015.

The LBLOCK chart price action is forming a parabola pattern, common for promising new altcoins as investor interest and hype is highest early on in crypto projects when many fundamental updates remain in the roadmap.

Lucky Block recently hit 30,000 holders according to BSCScan data. The larger the number of holders, the less control whales have over the price, improving investor confidence.

Also as stated in the whitepaper large holders that invested $10k or more during presale are subject to a 3-12 month smart contract lock up on their tokens, and there is a 12% transactional tax on selling, which is re-invested into the crypto lottery prizepool, token burn, and project marketing.

The recent LBank listing was one event that led to a slight ‘sell the news’ selloff however that dip has now been bought up, signalling investor interest in future FA updates.

One recent update on the @luckyblockcoin Twitter account is that beta testing of the Lucky Block app will take place on March 7th.

Another is that the Lucky Block team have submitted an application for a Bitfinex listing and are in contact with the exchange. CEO Scott Ryder is optimistic for future exchange listings and adding another 70,000 LBLOCK holders to bring the total number of token holders to 100k.

The additional trading volume a major cryptocurrency exchange listing would bring, and extra LBLOCK token holders would help it become the next 100x altcoin.

The first Lucky Block lottery draw is also scheduled to take place on March 25th, and the prizepool for that exceeds $3 million. 10% of each jackpot is redistributed to investors as a reward for holding.

Bitcoin is also up almost 5% in the past 24 hours, trading back above $44,000 and Ethereum leading it, up over 8% on the past day. ETH leading BTC tends to be bullish for altcoins and can results in an ‘altcoin season’.

Follow the official Lucky Block Telegram for the latest updates – admins will never DM you first, beware of scams, imposters and fake airdrops (no Lucky Block airdrops have been announced).

Cryptocurrency markets are highly volatile and your investments are at risk.

LTC/USD Beats the Market with 7.69% Gains